Homes for Sale in The Pecans

The Pecans is a gated community offering custom and semi-custom built homes in the city of Queen Creek. Located in Maricopa, the town of Queen Creek has a profound cultural and historical legacy that dates back thousands of years ago when the Paleo-Indians temporarily inhabited the area of modern-day Arizona. This migratory civilization primarily hunted Mammoth which, like elephants, were nomadic creatures that traveled long distances. Long after the Paleo had vacated the region, various native peoples from Mexico migrated here and established prosperous agricultural communities, thanks to their ingenuity in building complex canal systems that still exist in Phoenix and surrounding cities. During the 17th century, Spaniards arrived and established missions and attempted to spread Christianity. Following Spanish influence, Mexico staked its claim on the Arizona territory until the end of the Mexican-American War in 1848, which led to the concession of Mexico’s control over its “northern zone.” In the early part of the 20th century, groups of settlers attempted to establish homesteads in the area of modern-day Queen Creek, but many of them gave in to the harsh desert conditions. Nevertheless, men such as John Germann and J. O. Power and his brother, Buck, had the grit and savvy needed to tame the Arizona desert. These men were some of the first to dig big wells (some were 400 feet deep) in Maricopa County, each one pumping over 2,000 gallons of irrigation water an hour into their farms.

If you’re wondering what makes life in the desert such an attractive prospect for many homebuyers, it’s most likely the numerous natural spaces and mountains that provide countless outdoor activities that include boating, hiking, camping, golfing, horseback riding, and much more. There is San Tan Mountains Regional, a sprawling 10,000-acre desert park offering visitors with many trails for hiking and cycling, grounds for camping, horseback riding trails, places dedicated to picnickers, as well as individual programs for all ages. Further adding to the allure of The Pecans in Queen Creek is The Barn and Trailside Community Park located at Ranch House Parkway in Gilbert, a 7.5-acre community park featuring tree-lined streets, sidewalks separated from the road by lush landscaping, and offers visitors an array of outdoor activities such as fishing and various field sports. Additionally, you have shopping and dining options at Queen Creek Marketplace located at 21398 South Ellsworth Loop, a sizeable open-air shopping centers providing residents of The Pecans with name brand shops like Famous Footwear, Bed, Bath & Beyond, World Market, and others. Furthermore, you have shopping centers in the vicinity that offer a wide variety of excellent dining options like Barro’s Pizza, Chick-Fil-A, Chipotle Mexican Grill, In--N-Out Burger, and Olive Garden.

Homes for sale in The Pecans perfectly reflect the assortment of residential architecture found throughout the southwestern portion of America. Here you’ll see various types of single-family homes ranging from Spanish, Mediterranean, Southwestern, Spanish-Modern, Neoclassical, Spanish Revival, Spanish Art Deco, among others. Available properties in The Pecans vary in size from two bedrooms, three bathrooms, and 2,600 square feet to seven bedrooms, six bathrooms, and 5,300 square feet. In addition to that. Furthermore, if you're looking to building a home from the ground up, The Pecans has many lots for sale as well. In addition to that, if you’re not able to find something you like in The Pecans, we can assist you in finding a home that more fits your style in one of our neighboring communities. If you’re interested in learning more about properties in The Pecans, please don’t hesitate to contact us today for further information.

Timeless and pristine custom home in the gated community of the Pecans. This breathtaking 7500+ sqft, 6 bedroom/ 7.5 bath estate features over 50 pecan trees on just unde...

Some homes just capture your heart from the moment you lay eyes on them. This home is one of them. Named Risu Coeli, which is Latin for Heaven Smiles, every detail of thi...

*$250,00 PRICE REDUCTION for backyard landscaping* .Custom one of a kind modern home in the gated community of The Pecans is waiting for you. Main home is 6178sf & has 4 ...

This semi-custom home, built by Blandford Homes, presents a rare opportunity to live in a woodland paradise in the desert. Mature trees and landscaping, and a sprawling l...

All information should be verified by the recipient and none is guaranteed as accurate by ARMLS. Copyright 2023 Arizona Regional Multiple Listing Service, Inc. All rights reserved.

The DMG AZ Homes Team proudly serves the Southeast Valley area of the Phoenix Metro area which is comprised of the cities and communities of Ahwatukee, Apache Junction,  Chandler, Gilbert, Maricopa Mesa, San Tan Valley, Central & South Scottsdale, Tempe, and Queen Creek. We also help families in other areas of Maricopa & Pinal Counties with their real estate needs. Plus, we have a huge referral network both within Arizona and throughout the US – We can help you find a great Realtor anywhere! 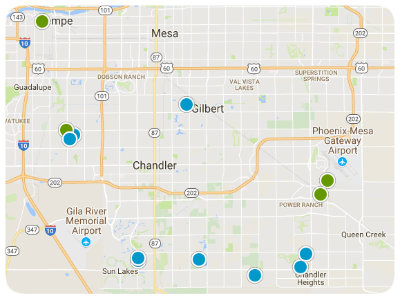